How to participate?
Volunteers
and internship
Contacts
META’s round table discussions reopened the topic of the education of pupils with a different mother tongue in selected regions
All news >>>

In 2018, META held four round table discussions about the implementation of language support for children and pupils without Czech knowledge in selected regions – in Ústí nad Labem, Plzeň, Central Bohemian and Prague regions. META representatives debated with key representatives of education, collected arguments, and presented their experience with organisation and realisation of lessons of Czech as a second language at schools.

A round table discussion in Ústí nad Labem took place in October 2018. It drew on the meeting of the local platform, whose establishment was initiated by last year’s round table discussion and its organisation was provided by the Counselling Centre for Integration. It was represented by Daniela Hrdličková, who introduced the visitors to the current situation in the region, the number of seminars and trained teachers in the topic of the education of foreign children and pupils. Another speaker was Eva Reicheltová, META ambassador and social worker at the Jirkov city authority, who presented her experience with the education of children with a different mother tongue in her city. Kristýna Titěrová then, on behalf of META, opened a debate by presenting the concept of intensive lessons of Czech as a second language, which the organisation piloted at two primary schools. The meeting was attended by representatives of schools, educational and psychological counselling centres, the regional authority and NGO. There was general agreement on the necessity of projects focused on the support of language preparation for pupils with a different mother tongue. There were some obstacles that schools are faced with as well – firstly, it is the lack of information among some teachers about the possibility of language preparation financing, or secondly, the difficult communication with school representatives.

In the Central Bohemian region, a round table discussion took place on 21 November, as a part of the conference of the Regional action plan. Information about the process of the conference and the speeches can be downloaded here.

A round table discussion took place in Prague on 29 November and in Plzeň on 5 December. More information here (the link will be added).

We have summarized observations from the round table discussions in an article here. 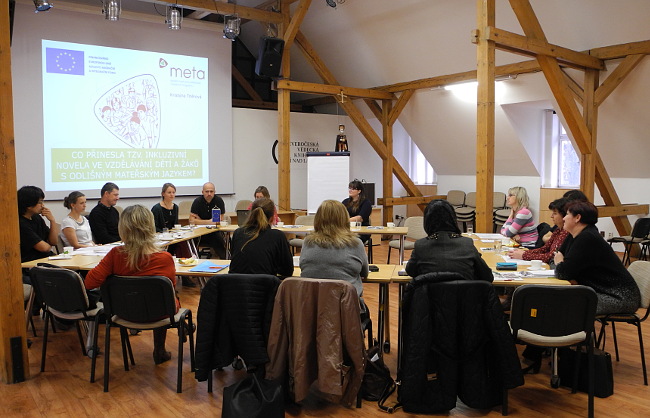 The round table discussions were realised as a part of the project Programme for the support of pedagogical workers in their work with foreign pupils VIII (reg. no. AMIF/7/03), which is funded under the national programme of the Asylum, Migration and Integration Fund and the budget of the Ministry of the Interior of the Czech Republic.